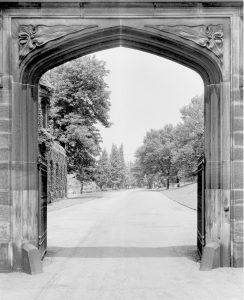 The Story of Allegheny Cemetery

As early as 1834 an attempt was made by Dr. J. Ramsey Speer, Stephen Colwell and John Chislett, Sr. to establish a rural cemetery. The three persons named were connected with the Third Presbyterian Church of Pittsburgh, of which Dr. D. H. Riddle was Pastor, and the congregation not having procured a burial ground, their attention was drawn to the subject and it was proposed to purchase a lot belonging to the heirs of Judge Roberts, situated on the south side of Wylie Street.

The entire lot, containing eleven acres, was offered for Five Thousand Dollars on easy terms and was considered large enough for one congregation.

In the meantime, the decided success of Mount Auburn Cemetery at Boston led them to change their plans, so as to embrace the prospective needs of the whole population of the two cities of all denominations that might think proper to join in the movement. With this thought in mind, Dr. Speer visited Mount Auburn at Boston, which was chartered in 1831, Laurel Hill in Philadelphia, 1836, and Greenwood in New York, 1838.

In the interval of years between 1834 and 1842, continued efforts were made to keep the subject alive through occasional articles in the newspapers advocating the measure.

Repeated explorations were made of all the sites that were considered suitable or available for the purpose, until finally the farm and homestead of Col. Bayard, embracing one hundred acres, located between the Greensburg Pike and the Sharpsburg Ferry, was chosen.

Several meetings of interested citizens were held, which resulted in the Act of Incorporation being passed by the Legislature without objection and returned with the approval of Gov. David A. Porter, dated April 24th, 1844.

Legal matters in regard to drafting the Charter and additional legislation was placed in the hands of the Hon. Richard Biddle, a very prominent lawyer who also served as the Cemetery’s first President.

The Charter of Allegheny Cemetery is unique in that it is not limited in time, nor does it contain any clause reserving the right to revoke the privileges granted. Therefore, Allegheny Cemetery was established for the purpose of perpetuity.

The same mission of the civic-minded philanthropists who established Allegheny Cemetery has been carried out since 1844, and today many of our most prominent citizens are proud to serve as Managers and Corporators without the thought of remuneration for their services.

“Allegheny Cemetery, historically a rural burial ground, provides a beautiful, respectful resting place for the dead and serves the community as a living tribute to generations past.  Our mission is to provide comfort to the families we serve by offering a peaceful environment, an elegant landscape, and a commitment to perpetually honor all of those entrusted to our care.”

To learn more about the history of Allegheny Cemetery and the stories of notable people at rest here, see our publications page.

To arrange a guided tour of the grounds, complete our request form.